Most Scary And Haunted Places In Rajasthan 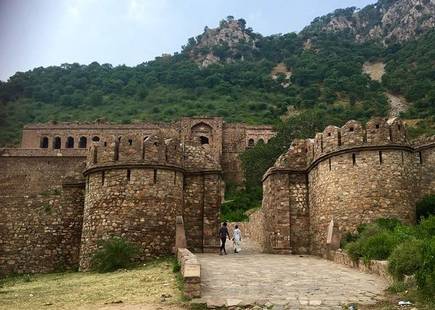 There is also no dearth of places in Rajasthan, which have covered many scary stories and ghost stories in their past. Today, let's know about the most frightening and haunting places of Rajasthan, where the spirits of tourists tremble and no one would want to forget to go here at night. So, see below some haunted places in Rajasthan.

The village Kuldhara in Jaisalmer district has been deserted for nearly 170 years. In Kuldhara no human being dares to go alone. It is said that the people here vacated the place to save their daughters from a sinful divan. The voice of dead people was recorded by detectors and ghost-boxes in Kuldhara village by the Pernomal Agency of Delhi and they also gave their names. Tourists visiting here have also heard the bangles of women.

Bhangarh Fort, located in Alwar district, 85 km from Jaipur, is one of the most feared places not only of India but of Asia. Many researchers who have researched ghosts have claimed to have negative powers in the fort of Bhangarh. Archaeological Survey of India has prohibited visiting this fort after sunset and before sunrise. It is said that ghosts reside at Bhangarh at night. In the fort, there are shouts, cries of cries, bangles of bangles, and a variety of shadows.

A historical fort was built in the 15th century in Chittorgarh, Rajasthan, which is currently known as Rana Kumbha Mahal. The royal life of King Maharana Kumbha was spent in this fort. Rana Kumbha Mahal is included in the scary places of Rajasthan because many tourists have confirmed that they have realized the ghosts in the fort. Sultan of Delhi Alauddin Khilji attacked Kumbha Mahal, then Queen Padmini here committed Jauhar (self-immolation) with 700 female followers.

Nahargarh Fort was built by Sawai Mansingh, Maharaja of Jaipur. Nahargarh Fort is situated on the Aravalli hills in Jaipur. This yellow fort looks very attractive in the pink city of Jaipur. The name of Nahargarh Fort also comes in the haunted places of Rajasthan. The owner of the restoration organization in Nahargarh is said to have been found mysteriously killed in his house. After his death, the Nahargarh Fort came to be known as haunted.

Abhaneri village Chand Bawdi is a haunted place in Bandikui of Dausa district. Chand Bawdi is said to have been created by ghosts in one night. But let me tell you, this place is so grand and huge that it will take many years to build it. Chand Bawdi has more than 3500 stairs. Which feels very scary when going down. Many tourists who come here have felt very strange. It is said about this place that there is a ghost here that does not let you climb the stairs.