Most Attractive Places To Visit In Jodhpur! 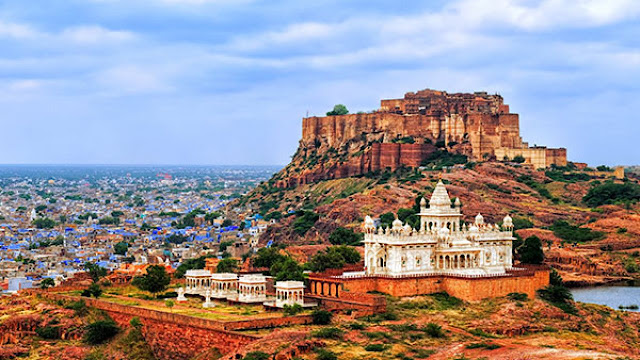 Jodhpur is a breathtakingly beautiful city with stunning blue houses everywhere. The 'Blue City', also known as the 'Sun City', is located in the majestic state of Rajasthan. The magnificent Mehrangarh Fort, the tower above the city is a magnificent architectural masterpiece. Surrounding this fort is the old town, a joyful synergy of wandering streets and a dazzling market. Today, in this post below we are going to provide a list of most beautiful places to visit in Jodhpur

Best Places To Visit In Jodhpur:

Jodhpur is famous all over India for its sweet dialect and its dress, costumes, colorful Rajasthani costumes attract everyone. There are many places to visit in Jodhpur city which are immersed in the royal history and culture of the city. Jodhpur is replete with houses painted in blue. The ancient buildings and the winding streets emanating from them, wearing red dhoti turbans in those streets, wearing dhoti kurta, looks very enchanting. The fort of Mehrangarh and Umaid Bhawan is sitting on the head of Jodhpur.

Jaswant Thada is a magnificent monument located in the beautiful city of Jodhpur in the west of Rajasthan. The memorial is an inscription built-in 1899 by his son Maharaja Sardar Singh in honor and memory of Maharaja Jaswant Singh II. It is used till today as a cremation ground for the Marwar royal family. Jaswant Thada is situated amidst the hills of Jodhpur. It is also called the Taj Mahal of Marwar and attracts tourists from all over the world.

Mehrangarh Fort was built by Rao Jodha in the year 1459 and it is one of the largest forts in the country. Situated on top of 410 feet high hills, this fort is the center of the city and it covers areas of 5 kilometers. Its walls are 36 meters in height and 21 meters in width. Seven gates have to be crossed to reach the fort, which includes Vijay Gate, Fateh Gate, Gopal Gate, Bhairon Gate, one and a half room gate, Marty Gate, and finally Loha Gate. The fort has magnificent palaces like Angar Sheesh Mahal and Phool Mahal.

Umaid Bhawan Palace, situated at an elevation in the city of Jodhpur, is an amazing example of art and history. Umaid Bhawan Palace is still the residence of the royal family and some parts of this palace have been converted into hotels. This palace was built between 1928 and 1943 by King Umaid Singh of Jodhpur. The palace was named after King Umaid Singh. The palace also has a beautiful 26-acre garden.